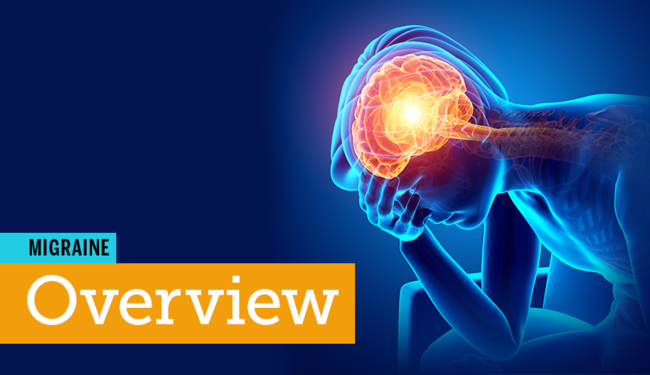 Migraine is not just a headache. Migraine is a neurological condition that can cause intense, disabling head pain along with many other symptoms. On average, most people with migraine experience episodic attacks about once a month. Some people with migraine experience attacks more frequently. About 10 percent of people progress to chronic migraine, meaning they experience symptoms at least 15 days out of every month. Read more about different types of migraine.

It can help to understand the terms associated with migraine. Some people refer to a single migraine or multiple migraines, while others always use “migraine” whether singular or plural. People with migraine are sometimes referred to as migraineurs. Migraine is usually diagnosed and treated by a neurologist – a specialist in disorders of the nervous system, including the brain and nerves – but may be treated by a general practitioner or family doctor.

Scientists do not yet know what causes migraine, but it may involve changes in the brainstem – the lowest part of the brain, just above the spinal cord. Migraine also seems to be connected to altered levels of chemicals, known as neurotransmitters, that transfer electrical impulses between cells.

In many people, migraine attacks are triggered by specific events or conditions such as stress, bright lights, alcohol, certain foods, or hormone fluctuations in the menstrual cycle. Read more about symptoms and triggers of migraine.

People with a family of history of migraine are much more likely to develop migraine. Read about more risk factors for migraine.

The History of Migraine

Migraines and headaches have been reported and studied during every period of history. Hippocrates wrote of migraines and visual auras in medical journals dating from 400 BCE. Hua T’o, a surgeon during the Han Dynasty in China, treated the emperor’s migraines with acupuncture. In the second century of the common era, the ancient Greek physician Galen distinguished migraines from common headaches, terming them hemicrania, meaning “half skull.” Later, the word entered the French lexicon and was corrupted to “migraine.”

Throughout history, theories about the cause of migraine have been based in superstition, and many painful migraine “cures” were employed – some of them potentially fatal. Anthropologists have studied skulls from 9,000 years ago and found evidence of trepanation – the drilling of holes into the skull. Trepanation may have been performed to treat migraines, epilepsy, and mental illness. Some historians theorize that trepanation sought to release evils spirits trapped in the skull which were believed to cause the symptoms. In the Middle Ages, migraine treatments ranged from bloodletting with leeches, cauterization with a hot iron, and placing garlic into fresh skin incisions. Later, attempted migraine treatments would include oil in the ears, electric shocks, radiation therapy, and lumbar puncture – piercing the membrane surrounding the spinal cord to release cerebrospinal fluid.

English clinician Thomas Willis introduced the term “neurology” in 1672. Willis is credited as the founder of modern brain anatomy and clinical neurology, and he categorized many causes of migraine attacks, including heredity, changes of season, and diet.

American doctors John R. Graham and Harold G. Wolff published the vascular theory of migraine in the 1930s. According to vascular theory, the brain’s blood vessels dilate (widen) during migraine and cause pain and other symptoms. They used Ergotamine as a medicine to cause vasoconstriction (narrowing of blood vessels) in the blood vessels of the brain during migraine. Ergot alkaloid drugs such as Migranal and Cafergot are still important treatments for migraine today.

Triptans, another class of vasoconstricting drugs, were developed in the 1990s. Triptans such as Imitrex (Sumatriptan) are medicines for the acute treatment of migraine attacks. The genetic theory of migraine gained support in 2012, when researchers proved that migraines are linked to specific genes. Current research indicates that inherited factors may account for as much as 40 to 50 percent of the risk for developing migraine.

Over the past 20 years, migraine sufferers began to report relief from migraines while taking medicines for other, unrelated conditions. Drugs for epilepsy and depression, cosmetic Botox injections, and beta blockers for heart conditions began to be prescribed off-label by doctors to treat migraines. Eventually five of these “borrowed” drugs for migraines were approved by the U.S. Food and Drug Administration (FDA) to treat migraine. New drugs that show promise for preventing migraines are currently undergoing clinical trials and FDA review.

How Common Is Migraine?

Researchers estimate that 12 percent of the population, or 39 million, may suffer from migraine in the United States. Most people with migraine – about 75 percent – experience an average of one migraine attack per month. Approximately 4 million have chronic migraine, experiencing symptoms 15 or more days out of the month. Anyone, including children, can develop migraine, but women are three times more likely to experience migraine than men. About 30 percent of women will experience migraine during their lives. Migraines begin before age 40 in more than 90 percent of people.

What are the different types of migraine?
The two most common types of migraine are defined by the presence or lack of an aura – an abnormal feeling, visual or auditory disturbance, or smell. Most people get migraines without aura or migraines with aura. It is rare but possible to get a migraine aura without a headache. Other specific types of migraine may be classified by unique symptoms. For instance, in an abdominal migraine, the pain is concentrated in the abdomen. A hemiplegic migraine causes numbness and weakness on one side of the body. Menstrual migraines tend to occur at regular times during a woman’s menstrual cycle. It is possible to get more than one type of migraine.

How is migraine diagnosed?
There is no one conclusive test for diagnosing migraine. Migraine is typically diagnosed by a neurologist with a combination of a neurological and physical exams, history of symptoms, and family medical history. The doctor may also order blood tests, imaging scans such as computerized tomography (CT) or magnetic resonance imaging (MRI), or a lumbar puncture (also called a spinal tap) to rule out other potential causes of symptoms.

Read more about the process of diagnosing migraine.

What are the symptoms of migraine?
The most common symptom of migraine is intense head pain. Migraine pain may be felt in different ways. Other migraine symptoms include fatigue, nausea, vomiting, numbness, weakness, uncontrollable movements, depression, and mood swings.

What are the phases of a migraine?
Most doctors describe migraines as having four distinct phases. However, people who get migraines do not necessarily experience all four phases as part of every migraine attack. Understanding the phases of migraine can help migraineurs better manage their condition by timing treatments for maximum effectiveness.

Read more about phases of a migraine.

How is migraine treated?
Preventative treatments for migraine may include beta blockers, antidepressants, and anticonvulsants (anti-seizure medications). Once a migraine attack has started, it may be treated with nonsteroidal anti-inflammatory drugs (NSAIDs), ergots, triptans, or antiemetic (anti-nausea) medications. Some people with migraine try Botox, a transcutaneous electrical nerve stimulator (TENS), clinical trials, or complementary or alternative treatments.

Read more about treatments for migraine.

Does migraine affect life expectancy?
On average, people with migraine live a normal lifespan and die from the same conditions that cause death in most people, including cancer and cardiovascular disease. Some studies have found an increased risk for stroke in women with migraine, especially women who get migraines with aura. Risk for stroke was highest in women with additional risk factors for stroke – those who smoke, take oral birth control, or have hypertension (high blood pressure). If you are concerned about your risk for stroke, ask your doctor to evaluate your risk and help you take steps to lower it.

You're in! Thanks for subscribing!

Easily manage your subscription from the emails themselves.

Kelly Crumrin is a senior editor at MyHealthTeams and leads the creation of content that educates and empowers people with chronic illnesses. Learn more about her here.

Tap Into the Power of Directness: Use "I"

Migraine is a common neurological disorder that affects about 1 in 7 people in the U.S. With...

Migraine is a common neurological disorder that affects about 1 in 7 people in the U.S. With...
read article >

Many people diagnosed with migraine work hard to figure out what causes (or triggers) their...

Many people diagnosed with migraine work hard to figure out what causes (or triggers) their...
read article >

A migraine attack is more than just an everyday headache or a tension headache. Migraine...

A migraine attack is more than just an everyday headache or a tension headache. Migraine...
read article >

If you experience migraine symptoms such as severe headaches, you may be eligible for disability...

If you experience migraine symptoms such as severe headaches, you may be eligible for disability...
read article >

Acupuncture — an ancient practice dating back 3,000 years — has been of interest to many people...

Acupuncture — an ancient practice dating back 3,000 years — has been of interest to many people...
read article >

Caffeine can be both a source of relief and a trigger for migraine attacks. Caffeine and...

Caffeine can be both a source of relief and a trigger for migraine attacks. Caffeine and...
read article >

Certain foods may be a trigger for migraine symptoms, including headaches. Keeping a food journal...

Certain foods may be a trigger for migraine symptoms, including headaches. Keeping a food journal...
read article >

© 2022 MyHealthTeams. All rights reserved.
MyMigraineTeam is not a medical referral site and does not recommend or endorse any particular Provider or medical treatment.
No information on MyMigraineTeam should be construed as medical and/or health advice.