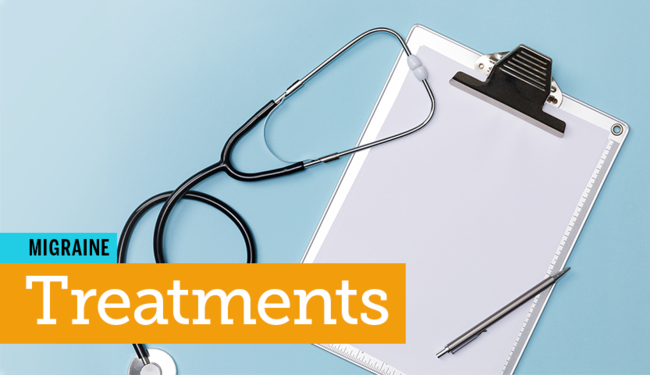 Migraine headaches are marked by debilitating pain, light sensitivity, and nausea. While there is currently no cure for migraine, many treatment options are available that can help prevent migraine headaches before they start and treat them once they do.

Your health care provider will recommend specific treatments for migraine based on the specifics of your condition and factors such as your age, overall health, and medical history.

Types of Treatments for Migraine

Some migraine medications must be used within strict limits. When overused, they increase the risk for progressing to chronic migraine — defined as experiencing migraine attacks 15 or more days in each month.

Some prescription drugs help prevent or reduce the frequency of migraine attacks. Many medications used to treat migraine are not approved specifically for migraine by the U.S. Food and Drug Administration (FDA). However, doctors frequently prescribe them off-label for this purpose.

Approved by the FDA to prevent migraines in adults, Aimovig (a formulation of erenumab-aooe) is the first member of a newer class of drugs called calcitonin gene-related peptide receptor (CGRP-R) antagonists. Aimovig is a biologic drug — a genetically engineered antibody, or protein, used by the immune system to identify and neutralize substances. Researchers believe the medication works by interfering with CGRP, a substance that dilates (widens) blood vessels and contributes to pain signals and inflammation.

Shortly after the release of Aimovig, the FDA approved several other drugs of this class including:

Beta-blockers are believed to help prevent migraine by relaxing blood vessels and reducing inflammation. Drugs that fall into this category include propranolol (sold as Inderal and InnoPran XL) and metoprolol (Lopressor).

Antidepressants of several different classes can be effective in preventing migraines. Antidepressants are believed to work in cases of migraine by changing the balance of neurotransmitters — chemical messengers — in the brain. One such neurotransmitter is serotonin, which delivers messages between the brain and the rest of the body and influences mood, brain function, reward, and bodily processes.

Venlafaxine (Effexor) — a member of the serotonin-norepinephrine reuptake inhibitor (SNRI) class — is one of the antidepressants most frequently prescribed to help prevent migraines. Tricyclic antidepressants doctors may prescribe for people with migraine include amitriptyline (Elavil) and nortriptyline (Pamelor). Drugs in the selective serotonin reuptake inhibitor (SSRI) class sometimes used to treat prevent migraine attacks include fluoxetine (Prozac) and sertraline (Zoloft).

ACE inhibitors such as lisinopril (Zestril) may help prevent migraines by relaxing the blood vessels.

Nonsteroidal anti-inflammatory drugs (NSAIDs) are the first treatment most people try to relieve migraine pain. Some NSAIDs such as aspirin (Bayer), ibuprofen (Advil), and naproxen (Aleve) are available over the counter (OTC). Others require a prescription, including:

NSAIDs are thought to work by inhibiting the production of chemicals that promote inflammation and blood-clot formation in the body. Taken regularly at high doses, some NSAIDs can cause gastrointestinal problems and abnormal bleeding. Additionally, taking NSAIDs too often can cause chronic migraine headaches.

Acetaminophen (Tylenol) is an OTC analgesic (pain reliever) and antipyretic (fever reducer). Acetaminophen is believed to work by altering the body’s perception of pain. Some OTC products, such as Excedrin Migraine and Excedrin Tension Headache, combine acetaminophen and caffeine. Caffeine is a stimulant and a vasoconstrictor — a drug that causes the blood vessels to narrow. Caffeine is believed to work in migraines by narrowing the blood vessels in the brain. Excedrin Migraine also contains aspirin.

Triptans are a class of drugs approved specifically for use in acute migraine. Triptans are believed to work by constricting blood vessels and reducing inflammation. Triptans include:

Treximet — a formulation of sumatriptan and naproxen — combines a triptan drug with an NSAID.

Ergot alkaloids are also FDA-approved for the treatment of acute migraine. Doctors typically prescribe these when triptans aren’t effective. Scientists believe ergot alkaloids work by constricting blood vessels in the brain and blocking the transmission of brain signals. Dihydroergotamine (Migranal) is an ergot alkaloid. Cafergot is a formulation of the ergot alkaloid ergotamine and caffeine.

Other Types of Drugs Used for Acute Migraine

Doctors have a range of other drugs to choose from for treating acute migraine symptoms.

Lasmiditan (Reyvow) is a newer oral medication used for the acute treatment of migraine. Somewhat similar to antidepressants, it works on one specific type of serotonin receptor.

Antiemetics (anti-nausea drugs) can help treat nausea in people with migraine in combination with other acute treatments. Antiemetics include:

In some cases, doctors will prescribe corticosteroids, such as prednisone or dexamethasone, in combination with other medications to treat migraine. Corticosteroids work by suppressing inflammation. They’re relatively safe for short-term use, but long-term use can cause serious side effects such as high blood glucose, bone problems, mood swings, and weight gain.

People living with migraine pain that’s resistant to other treatments may require opioids, such as codeine or combinations of hydrocodone and acetaminophen, such as Norco and Vicodin. Scientists believe opioids work by altering the body’s ability to perceive pain.

According to the National Institute on Drug Abuse, regular use of opioids — even as prescribed by a doctor — can lead to dependence. If misused, opioids can cause overdose and death. Many health experts, in fact, believe that opioids should not be used to treat migraines.

Rebound Headaches: A Potential Side Effect

In addition to any side effects specific to each drug, medications used to treat acute migraine have the potential to cause medication-overuse headaches, also known as rebound headaches. Researchers also believe that overusing these drugs can raise the risk for progressing to chronic migraines — migraines that occur 15 or more days out of each month. The risks of overuse are believed to be highest with aspirin/acetaminophen/caffeine combinations and opioids. Discuss with your doctor how to use acute migraine treatments safely.

Some people find migraine medications to be ineffective or intolerable. Several types of nondrug treatments that can be effective for treating or preventing migraines.

Botox, a formulation of onabotulinumtoxinA, is approved by the FDA to help prevent migraine attacks in people with chronic migraine. Botox is an injectable form of the neurotoxin produced by the bacterium Clostridium botulinum.

Botox is believed to work by inhibiting the release of certain molecules, such as acetylcholine, and preventing the movement of some nerves and muscles. Other nerve-blocking techniques are used to treat some people with chronic migraine, including sphenopalatine ganglion block.

Some people with migraine find neurostimulation (nerve-stimulating) devices effective for relieving symptoms. There are several types of neurostimulation devices that stimulate different nerves in different ways. Neurostimulation devices are believed to work by using electricity to interfere with pain signals. Devices from companies such as Cefaly, Relivion MG, gammaCore, and Nerivio are all approved by the FDA for the treatment of migraines. Some devices are indicated for treating acute migraine pain, while others can be used to prevent migraine attacks.

Cognitive behavioral therapy (CBT) or other forms of psychotherapy can help people with migraine better manage stress, which can be a major trigger for migraine. CBT is goal-oriented, focusing on specific problems and how to improve them.

Studies show that, over six to 12 months, CBT offers small but significant improvements in pain and disability and moderate improvements for mood in those with chronic pain. Psychotherapy such as CBT has even been shown to help with pediatric migraine (migraine in children).

Tracking diet, sleep, activity, and headaches in a journal can allow you to identify your migraine triggers. Making changes to your lifestyle may help you avoid these migraine triggers and reduce the frequency of attacks. Some people with migraine feel better when they improve their nutrition in general or try a specific diet such as the anti-inflammatory diet.

Complementary and alternative medicine therapies are popular with many people who experience migraine attacks. Natural or complementary treatments for migraine may include:

Researchers have studied some alternative or natural therapies in clinical studies, but in many cases, there is limited or inconsistent evidence that they are beneficial for migraine. For instance, yoga has been shown to reduce migraine symptoms.

A few natural treatments can worsen migraine or cause dangerous interactions with migraine medications. Let your doctor know if you try any natural or complementary treatments for migraine.

Brooke Dulka, Ph.D. is a freelance science writer and editor. She received her doctoral training in biological psychology at the University of Tennessee. Learn more about her here.

Kelly Crumrin is a senior editor at MyHealthTeam and leads the creation of content that educates and empowers people with chronic illnesses. Learn more about her here. Acupressure is a healing technique based on traditional Chinese medicine. It offers an alternativ...

Acupressure is a healing technique based on traditional Chinese medicine. It offers an alternativ...
read article > Migraine is a common neurological disorder that affects about 1 in 7 people in the U.S. With symp...

Migraine is a common neurological disorder that affects about 1 in 7 people in the U.S. With symp...
read article > A migraine attack is more than just an everyday headache or a tension headache. Migraine headache...

A migraine attack is more than just an everyday headache or a tension headache. Migraine headache...
read article > Acupuncture — an ancient practice dating back 3,000 years — has been of interest to many people l...

Acupuncture — an ancient practice dating back 3,000 years — has been of interest to many people l...
read article > Living with migraine can sometimes mean you have to be a bit of a detective to evaluate what hel...

Living with migraine can sometimes mean you have to be a bit of a detective to evaluate what hel...
read article >