Daith and Tragus Piercings for Migraines: Do They Help? 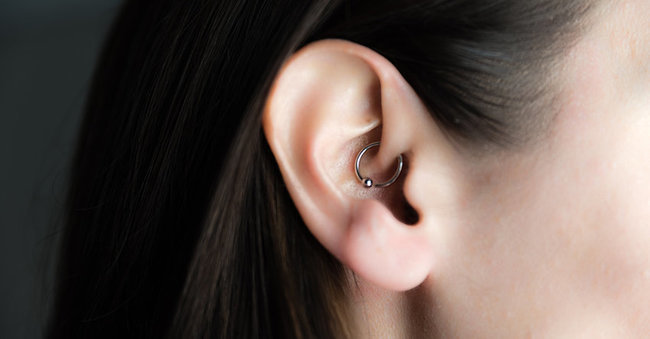 Daith and tragus piercings are among the most talked about – and controversial – alternative therapies for migraines. The cosmetic procedure, which involves piercing a small fold of cartilage near the opening of the outer ear, is believed by some to have benefits similar to acupuncture for migraine pain.

While there’s no scientific or clinical evidence to support their use as a pain treatment, daith and tragus piercings are a hot topic on social media. Members of MyMigraineTeam who’ve already tried many other treatments are considering the piercings as a possible remedy for debilitating migraines that affect their quality of life.

“Nothing has helped my chronic migraines. I’ve heard daith piercing might work. If so, where do you get it done?” asked one member, echoing the questions of many others. “I’m trying to understand exactly how daith works, and if it’s a ‘permanent’ form of acupuncture,” said another member. “I desperately want to try daith, but I keep seeing mixed reviews,” said another.

Members agree that daith piercing is not for everyone. Some swear by the benefits of ear piercings for migraines. Others reported it worked for a short while, and then their headaches came back. A minority called it a “complete waste of money” and worried about the risks.

The American Migraine Foundation (AMF), Cleveland Clinic, and other medical institutions assert there’s no research to support the claim that daith piercing helps relieve migraines. Reported benefits are widely believed to be a placebo effect, in which the brain convinces the body that a treatment with no therapeutic value has healing benefits.

A 2017 case study published in Frontiers in Neurology found that migraine symptoms improved for some people after a daith piercing, but worsened for others. The researchers concluded the treatment could not be recommended without further study. A 2020 literature review in Current Pain Headache Report also concluded that, similar to acupuncture, daith piercings may provide benefit in acute and long-term treatment of migraine, but additional research is needed.

Although there’s no permanent cure for migraines, piercing proponents claim the procedure is a long-lasting pain relief solution. Like acupuncture — a common migraine treatment — daith and tragus piercings treat migraine pain by activating specific pressure points in the ear.

Using earrings instead of needles, a daith piercing is thought to activate the vagus nerve, one of many nerves that carry messages to and from the brain. When the vagus nerve is stimulated, it interferes with signals to the brain that cause migraine pain. This mechanism is also seen in U.S. Food and Drug Administration (FDA)-approved vagus nerve stimulation (VNS) devices for treating migraines, which use electricity instead of earrings or needles to block pain signals.

Many migraine sufferers who’ve undertaken the experimental therapy report dramatic improvement. The 2017 case study cited an anonymous survey of 380 respondents who had daith piercings. Some 47 percent reported an initial reduction in migraine frequency after the piercing, and half of all respondents said their attacks became less severe.

MyMigraineTeam member comments generally support those anecdotal findings. “Since my daith piercing three years ago, I’m 98 percent migraine free!” said one member. “My migraines used to cause nausea and temporary blindness. Daith finally stopped those symptoms six years ago,” said another member. An elated member added, “My husband says it was the best money he ever spent … because now we can make plans!”

Some members claim that ear piercings helped them wean off pain medications. “I haven’t refilled my Imitrex (Sumatriptan) script since the daith piercing!” Another said, “It has been a year since getting daith and I’m off daily medication. I still get an occasional headache, but nothing like the migraines I had before.”

For many others, a daith piercing reduced, but did not eliminate, migraines. “Daith worked for about two months, then I started getting migraines again,” reported one member. Another, whose migraines returned after four months, said, “Now, I get them with the same intensity, but not as frequently as before.” One member added, “It hasn't reduced the number of migraines, but it has cut their duration.”

A smaller number of members reported zero success with daith. “I had one side done and it hasn't helped at all. It was a big waste of money,” said one member. “Mine didn't help either,” said another. “I only gained ‘cool points’ from my daughter.”

One member shared, “My neurologist warned me not to do it, but I went ahead anyway. It helped for a while. Then the migraines moved to the other side of my head and after two years, I still get drainage and soreness. Would not do again!”

The idea that the results might be a placebo effect doesn’t bother members who are feeling better. “If it's mind over matter, I don't mind being migraine-free most of the time. I've had only four to five migraines since daith, as opposed to 10 or more a month. I'm saving money on medication, so it wasn't a waste,” one MyMigraineTeam member said.

What Are the Side Effects of Daith Piercing?

As with any body piercing, daith piercings have risks that some experts say far outweigh the benefits. In one study, up to 35 percent of people with ear piercings had one or more complications. Here are some of the potential side effects of daith and tragus piercing.

Piercing through the cartilage is more painful than through the fleshier earlobe. “I won't lie, the initial piercing made me swear like a sailor, LOL, but it only lasted for a second,” said one member. “I have 16 body piercings and daith was the most painful,” shared another.

There are many reports of persisting pain, worsening migraine attacks, or slow healing for many months after cartilage piercings. “Mine took about nine months to heal. Hurt like a you-know-what, but it was quick. I highly recommend H2Ocean piercing spray for healing. Great stuff,” advised one member.

Cartilage piercings become infected about 30 percent of the time, according to one study. These infections can spread rapidly and cause permanent disfigurement of the ear if not treated early. Experts advise cleaning the piercing site several times a day with soap and warm water to avoid infection.

Noninfectious complications — like contact dermatitis from exposure to certain metals such as nickel — are common. “I had to get my earring taken out because I was having an allergic reaction to the metal. Migraines started again,” said one member. “My body rejected the piercing and started pushing the metal right out of my ear,” said another.

Because cartilage piercings are prone to irritation, a bump or scar can form at the piercing site.

MyMigraineTeam members who’ve had daith piercings on one or both ears often discuss tips for safe ear piercing.

Make Sure Daith Piercing Is a Good Fit

Depending on your ear structure, a daith earring may not fit or could cause problems, some members warned. “I wanted a daith piercing, but have been told my daith (cartilage) is too small,” said one, who was advised to consider a tragus piercing, which occurs in a more accessible area of the ear.

The right piercer is someone familiar with acupuncture points and migraines. “Any old piercing won't cut it,” said one member. Another said, “I found a gal who trained with an acupuncturist. She was able to find the exact right spot on me, mid-migraine, which stopped it almost immediately.”

Although there’s no data on which ear is more effective, members tend to get pierced on the side where migraines are most prominent.

Because of the long healing period, members say it’s important to be extra careful while sleeping, bathing, or combing hair. “My piercer would only do one at a time to leave me a side to sleep on,” reported one member. “Hair can get tangled through the daith hoop and hurts like heck when it’s tugged,” warned another. Other members noted that phone earbuds may not fit or be safe to use after a daith piercing.

Given the potential risks of daith and tragus piercing, it’s best to consult with your neurologist before starting any complementary therapies for migraines. Up to 50 percent of people with severe headaches use complementary and alternative medicine to relieve episodic migraines. Mindfulness meditation, tai chi, and yoga are the most promising mind/body options, and may be as effective as medication, according to research studies.

You Are Not Alone: Finding Support for Migraine Relief

By joining MyMigraineTeam, the social network and online support group for those living with migraines, you gain a community more than 75,000 members strong. Daith and tragus piercing is one of the most popular topics discussed.

Here are some conversations about daith and tragus piercings:

Do you struggle with migraine pain? How do you take care of yourself when the pain becomes too much to bear? Go to MyMigraineTeam today or comment below and start the conversation. You'll be surprised just how many other members share similar stories.

I’ve had the piercings about a year. My migraines have decreased from several a week to a few a month

Being Yourself Is More Than Enough

Article written by Jessica Wolpert Eye pain is a common symptom of migraine headaches. More than...

Who Do MyMigraineTeam Members Turn to for Treating Migraines? 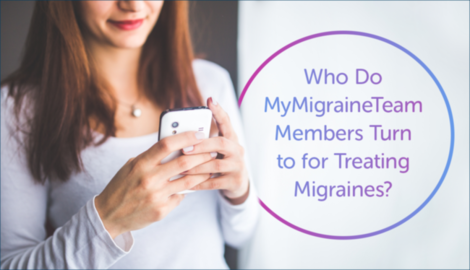 Who Do MyMigraineTeam Members Turn to for Treating Migraines?

Canceling Is Kindness: Keeping Safe From COVID-19 With Migraine

Article written by Kelly Crumrin Those of us living with pre-existing health conditions such as...

Canceling Is Kindness: Keeping Safe From COVID-19 With Migraine

Article written by Kelly Crumrin Those of us living with pre-existing health conditions such as...
read article > 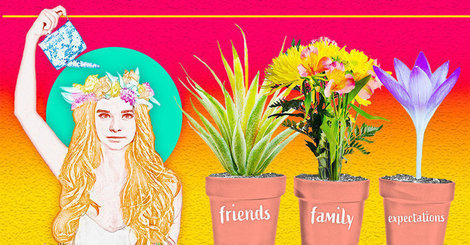 Have you ever put someone’s else’s needs ahead of your own? We all do it - we’re human, after...

Have you ever put someone’s else’s needs ahead of your own? We all do it - we’re human, after...
read article > 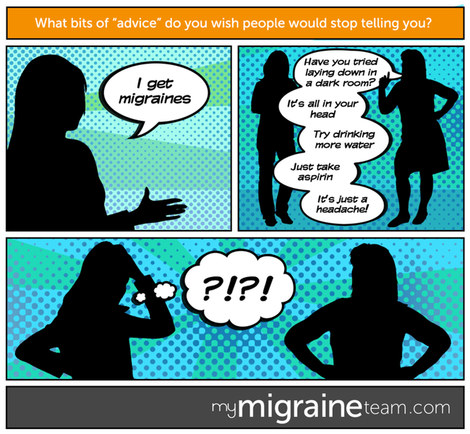 We asked and you answered! We posted this question: What bits of "advice" do you wish people...

We asked and you answered! We posted this question: What bits of "advice" do you wish people...
read article >

Maximize MyMigraineTeam by sharing a little bit about yourself. This article will help you get...

Maximize MyMigraineTeam by sharing a little bit about yourself. This article will help you get...
read article > 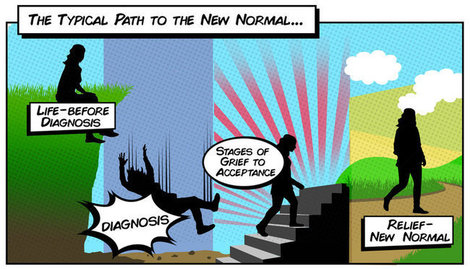 Receiving a chronic migraine diagnosis can inspire both relief and dread. It can be a relief to...

Receiving a chronic migraine diagnosis can inspire both relief and dread. It can be a relief to...
read article > 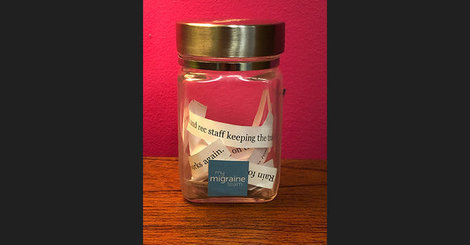 This time of the year can be overwhelming with expectations around the holidays, and living with...

This time of the year can be overwhelming with expectations around the holidays, and living with...
read article >

If you're tired of migraines - or just plain tired - you're not alone. According to one study,...

If you're tired of migraines - or just plain tired - you're not alone. According to one study,...
read article > 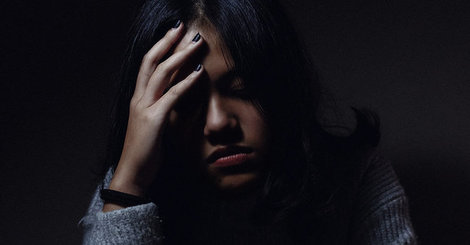 “I suffer from depression and anxiety with my migraines. I'm also bipolar, so it's difficult to...

“I suffer from depression and anxiety with my migraines. I'm also bipolar, so it's difficult to...
read article >

Two Ways to Get Started with MyMigraineTeam

Connect with others who are living with migraines. Get members only access to emotional support, advice, treatment insights, and more.

Get the latest articles about migraines sent to your inbox.

close
ABOUT MIGRAINES TYPES DIAGNOSIS CAUSES SYMPTOMS TREATMENTS RESOURCES
New to MyMigraineTeam? Learn More
Quick Links
Q+A Treatments A-Z Resources Are you a provider? Crisis
About Us
What is MyMigraineTeam? Partner with us Terms of service Press/News Privacy policy Cookie policy
Help With This Site
Getting started FAQ Community guidelines Contact us

© 2020 MyHealthTeams. All rights reserved.
MyMigraineTeam is not a medical referral site and does not recommend or endorse any particular Provider or medical treatment.
No information on MyMigraineTeam should be construed as medical and/or health advice.